I ADDED THE PICTURE TAKEN BY BEAR AND BIRD GALLERY TO SHOW THE COMPLETED WORK ON THE MOTH QUEEN
to see it larger please visit my flickr page or deviant art page-thanks!
Hi everyone! First off-THERE IS NUDITY HERE!!! so I apologize to those that are offended in any way-that is not my intention. Now, on with the show-Here are some WIP pics of the work for Small Stuff 3. These pictures are just horrible and not accurate in color. I was in such a hurry to turn them in by deadline that I forgot to purchase a new camera to photograph my final work. I will ask Amanda to send me pics when she gets a chance.
What you see here is the nearly completed work to at least give you an idea of my work for this show.
"Death of the Moth Queen"
and "Lamenting the Queen I and II". 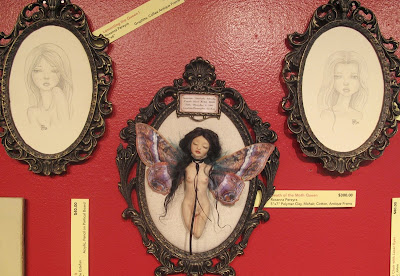 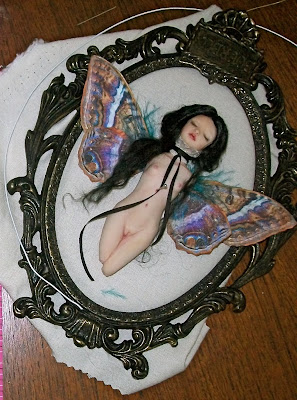 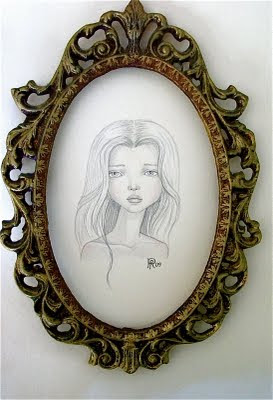 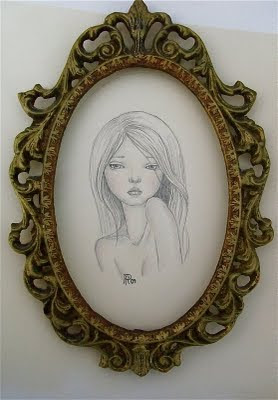 Descriptions:
The Moth Queen is approximately 5 inches tall, made of polymer clay over a wire armature and colored with washes of heat set oil paints. Her wings, which are attached to her back, are made of stiffened custom printed fabric, feathers and wire. Her beautiful black hair, that is styled in a multitude of braids around her head, is tibetan lambs wool and fine english viscose. Although not visible in the WIP pictures-She has a pin inserted in her mid section from which a small trace of blood appears to be coming out as well as a trickle of blood on the corners of her mouth and on her back next to her wings where a wire was impaled to keep the Queen in place. She is mounted onto linen cloth with a slight cushion to protect her from damage and framed in an antique brass frame that has been aged. Also a small plaque bears the entomology label with her information.
The other 2 works, Lamenting the Queen I and II, are graphite and just a hint of colored pencil on paper that has been tea stained. They are both set in antique frames that were aged to perfectly coordinate with the Moth Queen.
For those of you that like a little story behind a piece, here goes:
My version of the Moth Queen is based on the actual moth known in many cultures as the "Black Witch Moth" and is believed to be a bad omen. Unfortunately for her she was found moments after her demise just outside of Kensington Gardens in England by an all too eager entomologist that thought she would make a wonderful addition to his collection. When he picked her up to study her wing pattern, to his surprise, he realized what a rare specimen he had in his possession. He took her to his laboratory, penned fastidious notes and measurements for he realized that she had already begun to slowly disintegrate. Upon returning to the spot where he had found her to search for more evidence, he witnessed what appeared to be 2 small creatures resembling young women weeping. He rubbed his eyes in disbelief and when he looked again they were gone.
I hope you enjoyed the preview and the story .
P.S. Now that I have Margaret Sweet and Dolly Boo back and I will be posting them on ETSY this weekend.
Thanks for visiting-Rosanna
Posted by Rosanna Pereyra at 9:23 AM 6 comments:

Hi everyone and thanks for visiting my blog!!
I hope you all had a wonderful Halloween or Harvest Day.
A big THANK YOU!!! to those of you that have visited Bear and Bird Gallery for the Candy Apples and Razor Blades show, there is still time until mid-November to see all ofthe great artists that participated or to purchase a piece of art.
I have been working on my new pieces for the Small Stuff 3 show coming up in November 22, I will post them next week after I hand them over to the gallery. 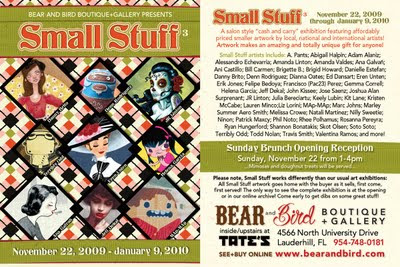 In the meantime here are a few pics of my face ups done on my Ball Jointed Dolls (BJD's). The large one is a Bobobie Sprite in white and the small one is a planet doll Tara in white.
They were done in a big hurry (about 45 minutes!)because I just couldn't wait to see what they looked like behind all of that white resin. I made the Tara wig out of mohair but I need to fix it and style it better. As soon as I sew them some outfits and get them entirely blushed i will take some final shots and post them. 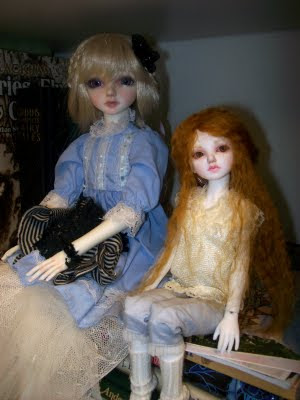 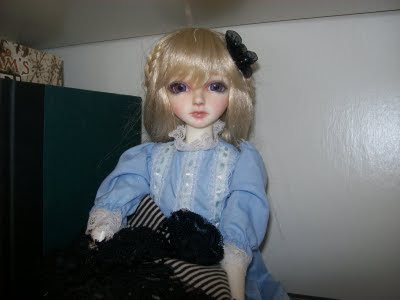 If you want to see them full size, check out my flickr account
Bye for now!
Rosanna
Posted by Rosanna Pereyra at 3:21 PM 5 comments: 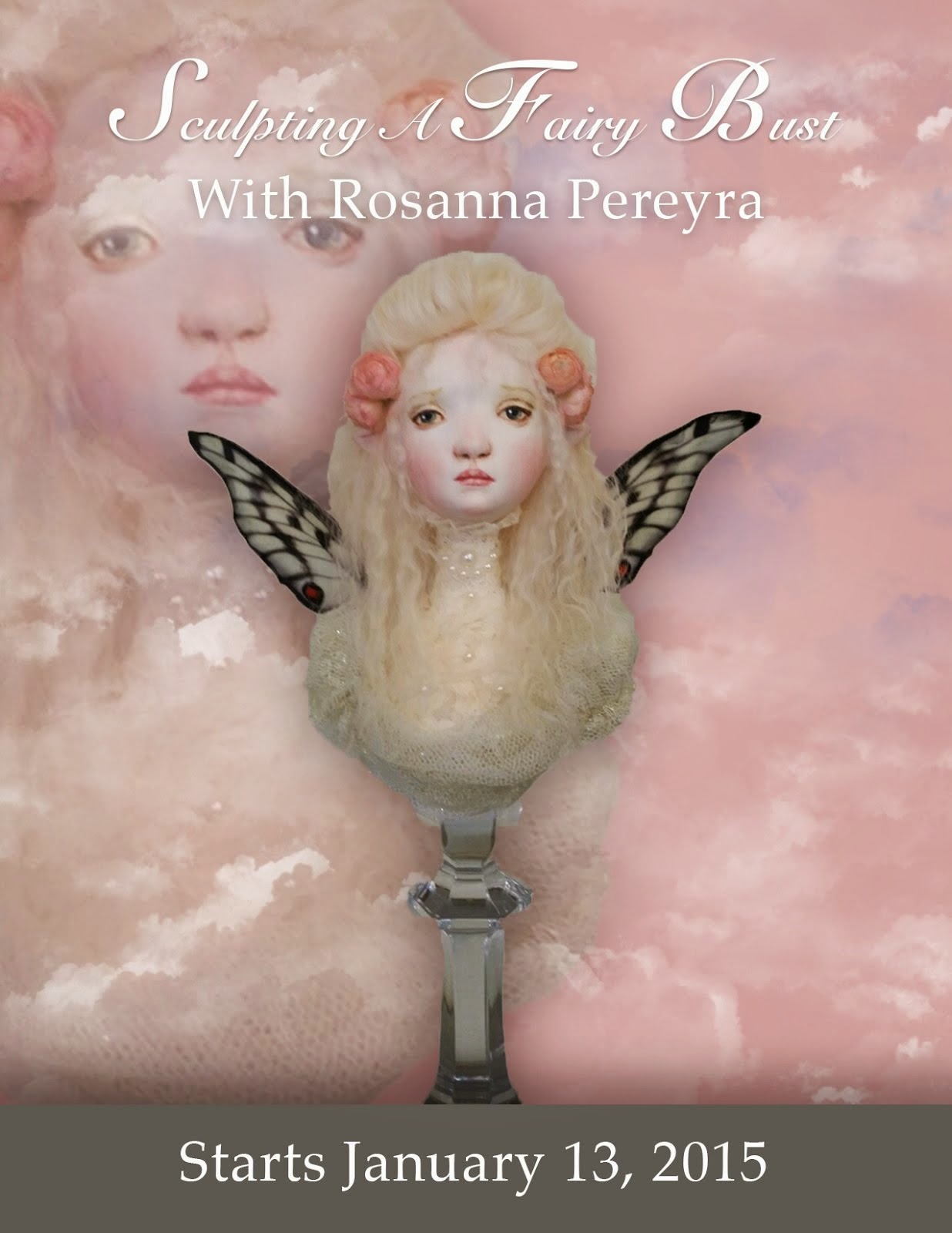